The Huffington Post Names a Black Woman as Their New EIC 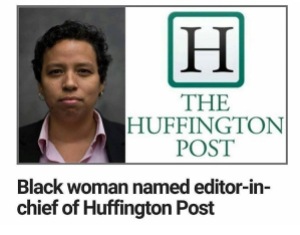 This is truly a historical moment for the Huffington Post. Although the popular news site has Black Voices which is a branch of their site devoted reporting on the black community, the website’s Executive Editor, Liz Heron tweeted a photo of their writer’s meeting and it went viral. The photo was widely criticized by black twitter for not having a single black person in their writer’s meeting. The irony is they were posting it to make a point of how the majority of their writers happened to be women (no glass licencing here) but there seemed to be another form of discrimination taking place, perhaps racial.

It’s good to see that the Black Voices section of their website isn’t the only portion of the Huffington Post where black people can hold a high position.

Polgreen said this about The Huffington Post “The DNA of The Huffington Post is fundamentally progressive, but I think that has a really capacious meaning and comes to include so many of the things that motivated not just the people who were rah rah Bernie or who voted for Hillary Clinton, but also many, many people in the United States who voted for Trump, who have fundamental concerns about the way the country is moving and the future,”.

Polgreen said the Huffington Post has an intolerable role to play in human history.

“When I say human history, I don’t take that lightly,” she said. “I think that just as there were moments when the Washington Post or The New York Times or the Times of London during World War II had a huge mission, we, too, have a huge mission. And that is to listen, to report, to tell stories, to seek out the stories and voices that aren’t being heard, even ones that might feel uncomfortable to us.”

She went on to say, “I just think that this group of people and this platform have so much to contribute to the betterment of humanity and to much greater journalism.”

To the Teachers Far and Near We Thank You!
In Honor of National Women’s History Month
Beyoncé’s Formation Scholarship Winners are Here!